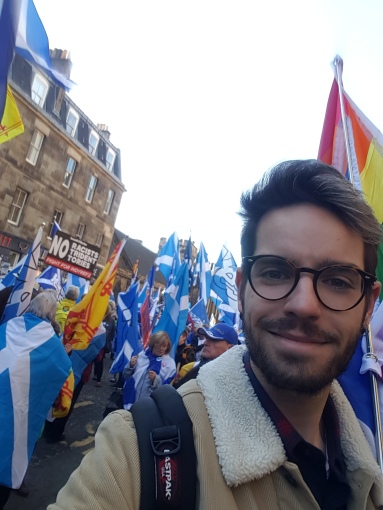 We’re only three days into 2019, and The Times has already graced us all with an opinion piece titled “Brexit has shown the pain of leaving a close union“. It is written by Struan Stevenson, a former Conservative MEP for 15 years, and the whole thing is as morbidly distorting of reality as you’d expect from someone who is opposed to the renewable energy generated from off-shore wind turbines.

His perspective is premised on the idea that the shambles of the Brexit process made clear that breaking from any political union would be an almost Sisyphean affair, and so Scotland must forget all about her aspirations for independence.

However, I think that Brexit has outlined one thing only: that there’s never been a stronger case to hold a second Scottish independence referendum, and that it must be announced this year.

I’m not a big fan of Devolution, in the sense that I find it wholly patronising, a commiserating prize. It’s like having a parent holding on to the car keys and bank accounts of their adult son/daughter, because they aren’t “responsible enough” to manage their own affairs, telling them that they can only use the plastic cutlery and look after the family pet. Of course, thank goodness we have Devolution at least, because the alternative would be much worse, and we wouldn’t have achieved many of the great accomplishments of this generation, like free tuition in Scotland, a moratorium on fracking, and many other things.

Nonetheless, Devolution was voted for, and it was supposed to be the law of the land. I say supposed because Devolution recognises a degree of sovereignty to the Scottish Parliament, something which has been wholly ignored in the power-grab pushed through under the guise of the Brexit negotiations.

Holyrood’s cross-party majority made it very clear: there was no Scottish consent for the Withdrawal Act of the European Union. The Scottish Government offered compromises (staying in Single Market) that reflected Scotland’s overwhelming vote to Remain, but the UK Government stuck its fingers into its years screaming BLAH BLAH BLAH as it pushed through with its shambolic Brexit.

So much for J. K. Rowling’s fantastic assertion that rejecting independence would put Scotland in a stronger position within the United Kingdom (just writing this down makes my blood boil). By rejecting independence in 2014, Scotland had a chance to take the key to its shackles and be set free, but 55% of us chose to hand that key back to our overlord, for fear that too much freedom would be the end of us.

Some Brexiteers might go on and on about how cutting ourselves from the EU will make us more able to act internationally, but that is ridiculous. The UK has always been a key international player, not least because of its history, and the EU didn’t put a stop to that.

Leaving the EU while claiming to do it for the sake of internationalism is like choosing to amputate a leg because getting rid of the extra weight will make us a better sprinter. It’s such a stupid idea only a buffoon like Boris Johnson and his blind acolytes could swallow it.

Scotland has always been an outward looking nation. Perhaps not so much by choice, but because it was necessary for a small nation sharing an island with a much more powerful neighbour. Pulling up the bridge and closing the gates to our castle built out of straws doesn’t make any sense in 2019. It will only ensure that we starve ourselves to death – metaphorically speaking – as the world outside goes on like before, facepalming themselves as they wonder how a population could do this to itself (decades of Right-wing press brainwashing, in short).

Many of those who voted against independence did so because they were told by Labour, Tories and Lib Dems that independence risked pulling Scotland out of the EU. In their words, voting No was the only way of guaranteeing our continued EU citizenship (no, you’re not the only one feeling your stomach turning at the irony of this).

The Scotland I know isn’t reflected in this Brexit clusterbourach. And if we have a different vision for our future than England and Wales, then let each follow the path chosen by their people – without dragging Northern Ireland and Scotland along.

2019 must be the year IndyRef 2 is announced

As I’m writing this, Brexit is only 85 days away. There is no greater clarity today about what the future holds than on the morning of the EU Referendum, no reasonable path to follow, no cohesion across the UK. The only certainty is that both Theresa May and Jeremy Corbyn are despised by the vast majority of the population, and that we’ll all be worse-off under any scenario that takes us out of our current arrangements with the EU.

At last year’s SNP Conference, Nicola Sturgeon said her party would make an announcement about a possible new IndyRef once the terms of the Brexit deal became clearer. That time has come, because I don’t think there won’t be much more clarity than what we have at the moment.

Brexit is a path towards a bigoted, nasty, inward-looking future. Scotland deserves much better. We voted Remain. Everyone I speak to within the independence movement is anxious to get started on a new campaign.

Unlike the Brexiteers, we have actual plans about the future for an Indy Scotland. This isn’t a spur of the moment vanity – our people have been waiting for independence since the corrupt aristocrats of this country sold themselves and their country to this Union little over three centuries ago. There isn’t a better time to make our hopeful, positive case for a future brighter than any shithole Corbyn and May try to lead us to.

Go on, First Minister. You’ve continuously stood by me as an EU migrant living in Scotland. Give me the opportunity to play my role in the fight for Scottish independence, so that me and thousands of other Scots may get on with striving for a better future than anything promised by the United Kingdom.